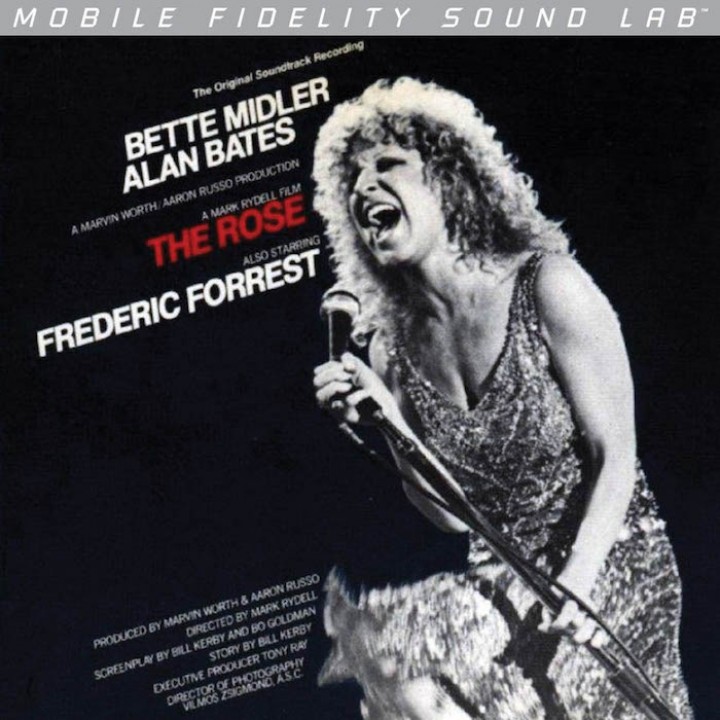 Numbered Edition Silver Label LP
Bette Midler’s first leading role in a musical remains her best. As the soundtrack for that film, The Rose spotlights The Divine Miss M’s outstanding performance as a character in the persona of Janis Joplin. Midler received an Oscar nomination for Best Actress, and while the record contains no visuals, it punctuates the raw emotion and show-stopping persuasion that the singer brings to upbeat, rollicking fare composed in tribute to the late Joplin. Her reading of “When A Man Loves a Woman” remains definitive and unique for being sung from a female’s perspective.

Mastered on Mobile Fidelity’s world-renowned mastering system and pressed at RTI, this Silver Label LP allows listeners to hone in on Midler’s voice like never before. Kernels of previously unheard tonalities, richer hues of her bluesy timbre, and better-defined contours of her phrasing come to fore—as do the contributions of guitarist Steve Hunter and drummer Whitey Glan, both members of Lou Reed’s Rock ‘n’ Roll Animal tour. No, The Rose isn’t your conventional adult-contemporary pop offering from Midler. It’s much more.

Always a natural-born theatrical star, Midler demonstrates these abilities to wondrous effect throughout, pouring herself into the painful sentiments of “Stay With Me” and raising hell on raucous numbers such as “Sold My Soul to Rock ‘N’ Roll” and “Keep On Rockin’.” Muscle Shoals sounds and Memphis-birthed shuffles keep Midler balanced and engaged. Producer Paul Rothchild, who helmed Joplin’s final salvo, matches the headliner’s zest by keeping tight-fisted control over the material selection and sonics. Never does Midler seem as if she’s merely paying tribute or playing a part; she makes listeners feel every note.

It’s apt, then, that she’s afforded carte blanche on the title track, a gorgeous and career-defining moment of immense proportions and the only song here not performed in the persona of Joplin. There’s no better way to wrap up an album of nearly shamanic power, and an effort that, along with The Divine Miss M, remains Midler’s peak.

1. Whose Side Are You On

4. When a Man Loves a Woman

7. Love Me With a Feeling

11. Let Me Call You Sweetheart