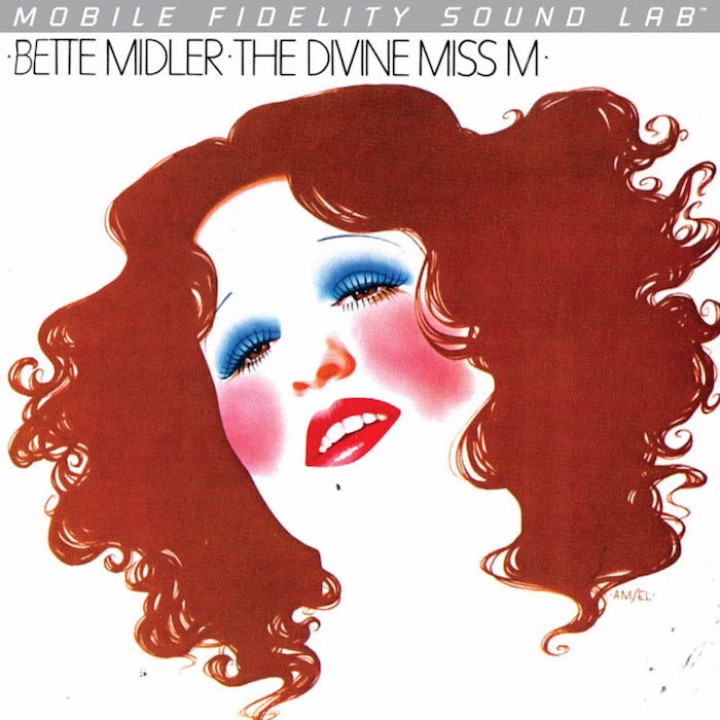 Numbered Edition Silver Label LP
Oh, behave! Bette Midler’s sparkling, energy-pulsing 1972 debut features the singer honing her trademark brassy personality as well as showing off an intimate, raw edge that fell by the wayside later in her career. Witness her forlorn, melancholic, and heartbroken moods, all conveyed with supreme emotion on several riveting ballads. But this LP is no downer. Midler offsets any bleakness with playfully campy songs laced with unadulterated enthusiasm and joyous defiance. This is a diva lover’s delight. The music is astonishingly alive. A superstar is born!

Mastered on our world-renowned mastering system and pressed at RTI (the best record plant in North America), Silver Label numbered edition LP presents The Divine Miss M with the warmly cozy and front-row perspective that the music demands. Midler’s voice is transparent and full, the timbral shadings colorfully outlined, the vocal images appearing as if she’s singing just a few feet away. Similarly, her cast of back-up vocalists (the Harlettes) receives ample face time on songs that come across as if performed by a girl-group revue. Midler has cut many records in her career but none are this entertaining, diversified, and, now, sonically spectacular.

There’s always risk associated with interpreting other artists’ classics and hits, but Midler makes every song here her own. She injects “Chapel of Love” with extra swagger and feminine gusto. In her hands, the Carpenters’ “Superstar” becomes more heartbreaking, filled with desolate sentiment and lonesome ache. John Prine’s ballad “Hello In There” echoes, as if sung to an empty room, with forlorn emotion. The 50s smash “Leader of the Pack” positively stomps and declares, her band in tow, that she’s not going to be stopped. Indeed, Midler’s interpretations of these staples surpass the previous versions, mostly due to her impeccable strong vocals and contagious passion. She doesn’t quit. And don't you dare decline her offer on "Do You Want to Dance!"

What else can be said of her trademark “Boogie Woogie Bugle Boy,” her update of the Andrews Sisters’ jazzy hit landing in the Top 10, featuring a scat vocal (!), and smartly walking the line between campy fun and serious reverence. Similarly, Midler’s two takes of “Friends”--the first off-the-cuff, wild, snappy, and humorous; the second slightly cooler and infused with gorgeous harmonies--remain modern marvels. There’s not a bad note on this incredible record.