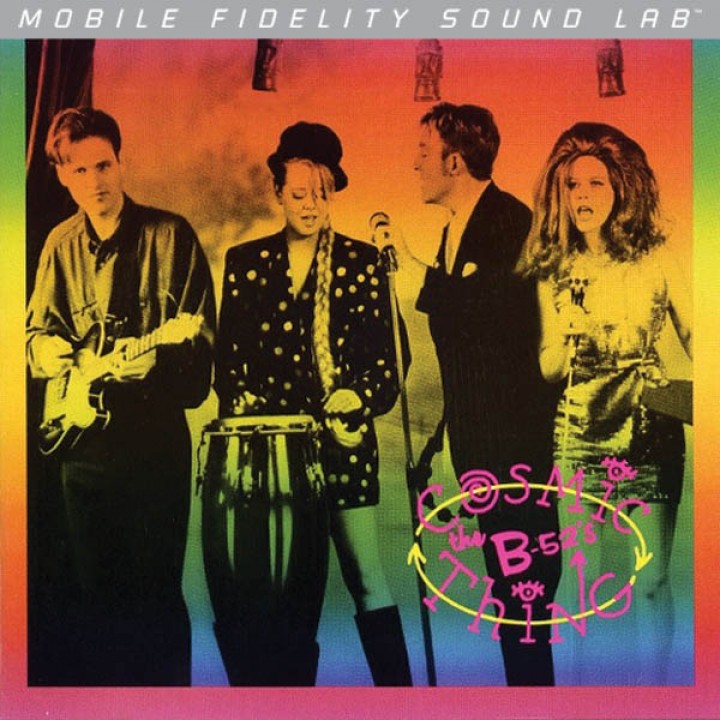 Numbered Edition Silver Label LP
Mention the phrase “Love Shack” and anyone you’re talking to will immediately know to what you’re referencing. Few songs stick in the brain with such lasting power, fond memories, and sing-a-long potential as the B-52’s blissful 1989 smash, one of the many moments that make the band’s Cosmic Thing such a timeless affair. The group’s melodies were never sharper, its vibes never as carefree, and attitude as joyous as on this multi-platinum affair that stayed on the charts for more than a year.

This Sliver Label LP dazzles with glorious textures, deeper low-end frequencies, more pronounced midrange information, and enhanced vocal dynamics absent from prior editions. Especially noticeable is the additional color and sense of rhythmic involvement in the already-persuasive pop-rock tunes, guaranteed to lighten any mood and ignite any celebration.

Urging listeners to “roam around the world” on one of the two Top 5 singles here, the B-52’s follow their own instructions, constructing lively fare assembled from quirky riffs, bizarre albeit smooth harmonies, strident lead vocals, jagged tempos, and infectious choruses. At heart, Cosmic Thing is a dance-your-ass-off soiree. Leader Fred Schneider delights in kitsch, his deliveries combining goofy pronouncements and half-rapped words that speak the co-ed ensemble’s long tradition of originality, flair, campiness, and irreverence.

Better still is the band’s embrace of a shinier, funkier sound established by producers Don Was and Nile Rodgers. The production, exponentially improved on this reissue, complements the upbeat energy, well-crafted songwriting, and emotional exuberance demonstrated on everything ranging from the kick-starting “Bushfire” to rambunctious “Junebug” to wild, weird, and wonderful “Love Shack.” Just try not to smile after spinning this LP. It’s impossible.