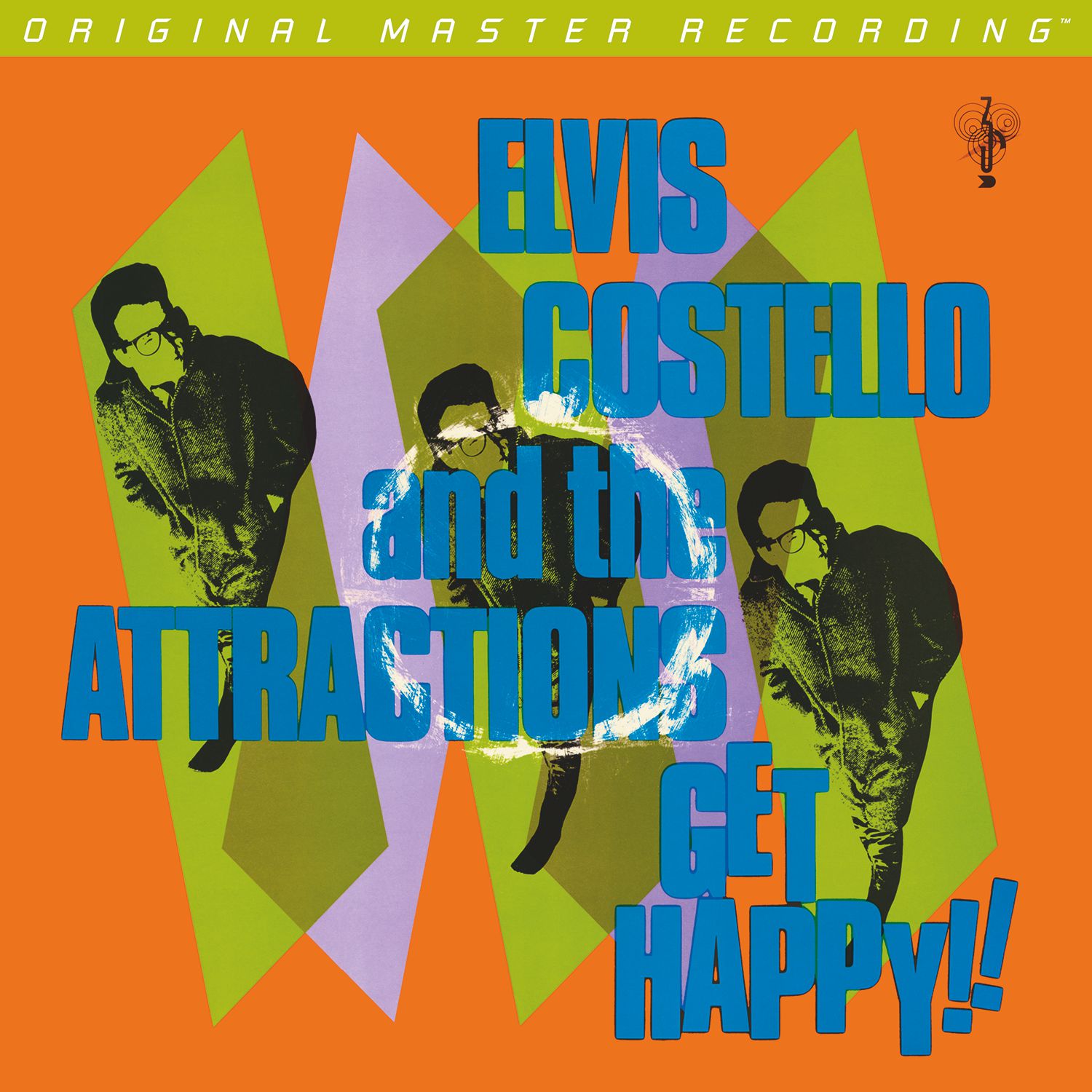 Numbered Edition 180-gram 2 LP 45 RPM Sourced from Original Master Tapes
Elvis Costello and the Attractions’ masterful Get Happy!! is largely believed born of national scandal. While in a Holiday Inn bar, the English singer attempted to end an annoying conversation by baiting Stephen Stills with outrageous, offensive racial remarks about Ray Charles and James Brown. With everyone involved inebriated, the details are unclear, but the fallout—death threats, radio embargos, protests—is infamous. The upshot? Costello and company retreated, scrapped a planned record, and created the soulful genius that is Get Happy!!, the band’s fourth consecutive five-star effort.

Half-speed mastered from the original master tapes, and pressed on two 45RPM LPs to replicate the very first promotional pressing in the UK, the 1980 LP has never sounded better on any format. Rather than cram nearly 50 minutes of music and 20 songs onto a single record, Mobile Fidelity has gone the extra mile and back to the album's UK roots with two 45RPM discs. For the first time, listeners can home in on the record’s signature sound that relates to the decision to record the vocals in a studio’s glass strings room. In addition, the dimensions and images associated with Steve Nieve’s penetrating organ, Pete Thomas’ punchy drumming, and Costello’s bounding vocals know no limits. The music simply leaps off the proverbial page, the uptempo rhythms jumping and nimble bass lines kicking.

Clearly, the group is motivated, and the leader brings some of his very finest songs to the table, including “High Fidelity,” “Riot Act,” “Motel Matches,” and “The Imposter.” While some believe the drunken incident caused Costello to shelve a planned new-wave-leaning effort for the soul-stoked Get Happy!!, the vocalist claims that his ability to find so many great soul records in America from 1977 through 1979 inspired the group to change course. Whatever the cause, Get Happy!! is a start-to-finish wonder.

Paying homage to Northern soul, Motown, Stax, and Southern soul strains, and infused with smooth and gritty arrangements, Get Happy!! runs on an efficient R&B motor. Subtle tributes abound. “High Fidelity” quotes a Supremes song; “Love for Tender” borrows a Supremes riff; “Opportunity” tips its hat to Al Green; “Clowntime Is Over” bows to Curtis Mayfield. And two covers, of Sam & Dave’s “I Can’t Stand Up for Falling Down” and the Merseybeats’ “I Stand Accused,” are recast as quick, R&B rave-ups. There’s not a misplaced note or bad step on this record. And for history buffs, the closing, searing ballad “Riot Act” is Costello’s response to his hypocritical critics and finger-pointers.
As essential as anything in Costello’s catalog, and one of the truly great records of the 1980s, you owe it to yourself to experience Get Happy!! in the supreme sonic fidelity that this numbered edition Mobile Fidelity double-LP pressing affords. For those intimately familiar with its contents, listening will be a revelation. And for fans that have never heard the record, prepare to be wowed.
Part of Mobile Fidelity’s Costello catalog restoration series, Get Happy!! will make you positively ecstatic.