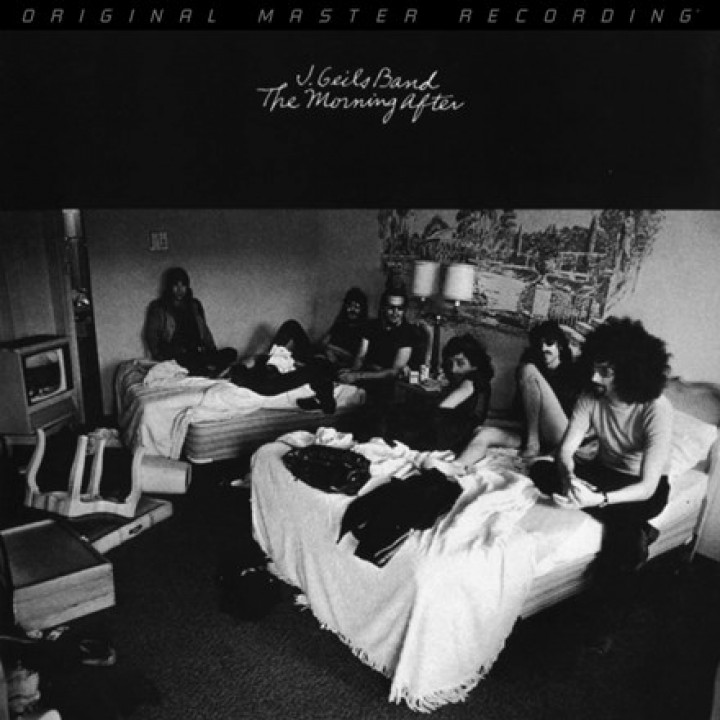 The Morning After (J. Geils Band)

The trashed hotel room and communal living depicted on the cover of the J. Geils Band's sophomore album tell you all you need know about the music, spirit, and energy spilling from within The Morning After. Shot through with raw, lean rock n' roll sparked by juke-joint blues and loose rhythms, the 1971 set comes on like the most fun, party-still-raging hangover any group in the 70s enjoyed. And now it rolls with an abandon that takes you inside the sweaty, smoky roadhouses and wall-to-wall-packed clubs the group dominated in its heyday.

Mastered from the original master tapes, pressed at RTI, and strictly limited to 3,000 numbered copies, Mobile Fidelity's 180g vinyl LP achieves a sonic acumen that brings you face-to-face with the sextet's white-hot instrumental prowess and magnetic personalities. It's always been difficult to single out just one member of the band given the cohesive bluster the ensemble achieves as a whole, but this collectible audiophile edition allows you to do just that if you so choose, by way of superb imaging and separation. As for the band's trademark dynamics? Here, they feel like they're on the verge of exploding.

So go ahead. Twist the volume knob to the right as much as you want. You'll lose none of the focus, detail, placement, or presence no matter how high the decibels climb. The Morning After spills forth with previously unheard tonalities, ranging from the distinctive swells of Seth Justman's slow-burn organ to the live-wire spark of Geils' own downed-power-line-jumpy guitar work to the mooring hi-hat/cymbal/snare combinations of arrangement-steadying drummer Steven Bladd. Friends, this is raw rhythm n' blues, this is how it should feel, and, man, this is how it should sound.

Not for nothing did the Massachusetts-based collective name the album The Morning After. The music within doesn't abide by rules, ignores speed limits, flips the bird at curfews, and digs deep down into America's blues roots to yield organic material at once fresh, exciting, traditional, and original. The back-porch punch provided by the combination of "Magic Dick" Salwitz's searing, melodic, snake-like harmonica and vocalist Peter Wolf's animated, barely controlled deliveries is alone enough to make anyone with a faint pulse to stomp their feet, climb atop a kitchen table, and kick their boot heels until the neighbors call the cops.

Just witness the deceptive smoothness of the snake-like "So Sharp" or Maxwell Street zest of the aptly titled Magic Dick showcase "Whammer Jammer," which will leave you gasping for breath before it even ends. J. Geils Band also knew its way around deep-cut soul. The ensemble's Top 40, howling, adrenaline-to-the-heart rendition of the Valentinos' "Looking for a Love" and swirling, romantic take on Don Covay's "The Usual Place" seamlessly balance drive and emotion. Coupled with rafter-shaking originals such as "Floyd's Hotel" and the riff-propelled "I Don't Need You No More," sent up with typical Wolf vocal flair, and the record parks the band's all-night festivities and go-for-broke attitudes right on your front lawn.

One last word of warning to the uninitiated: The Morning After is not the slick-pop J. Geils Band of "Centerfold." And that is a very good thing.