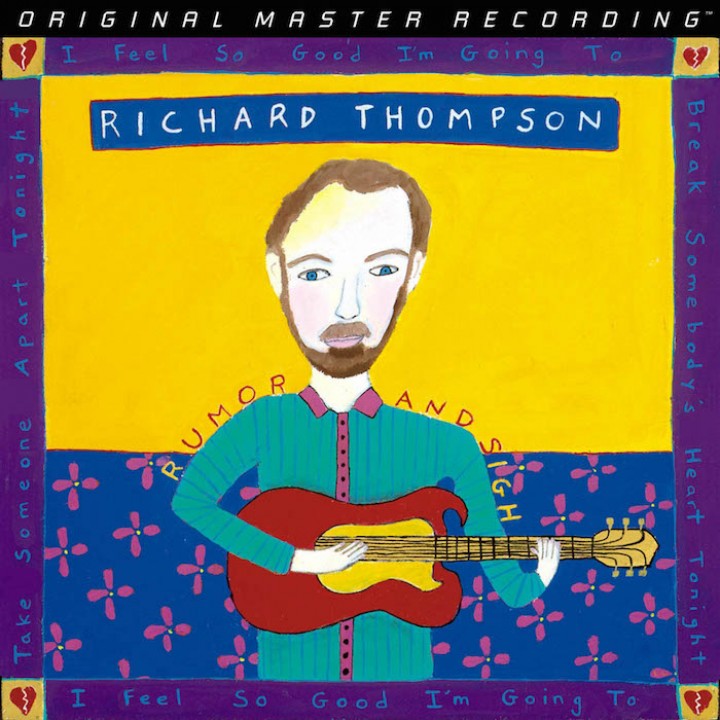 Richard Thompson manages all of his usual superhuman feats on Rumor and Sigh. Rippled, vibrant guitar lines that sound like they're coming from four guitars? Check. Lyrics that expose the delicate quirks of human behavior in witty, truthful manners? Here. Engaging vocals that arrive as if they are sung only to you, the words doubling as whispered thoughts in your own head? Yep. But Rumor and Sigh goes further by featuring astute, lively production and well-planned arrangements that turn the 1991 album into one of the – if not the – most cohesive and accessible efforts of Thompson's storied career.

Mastered from the original master tapes, pressed at RTI, strictly limited to 3000 numbered copies, and on 180g vinyl 2LP for the first time ever to provide needed groove space, our analog edition breathes with an effervescent openness that makes the music emerge with a livelier sheen, standout dynamics, and unstoppable energy. The dead-quiet pressing makes it immediately evident Rumor and Sigh endures as a very special album – a cohesive, varied, and fun set spiked with some of Thompson's finest compositions and an exoticism that extends to the modest use of the hurdy-gurdy, mandolin, concertina, and crumhorn.

Casual fans will likely even recognize the Mitchell Froom-produced release includes the incomparable "1952 Vincent Black Lightning," a motorcycle-based tale of desire, love, and death rightly recognized by TIME magazine as one of its All TIME 100 songs. It, and the other 13 tracks, takes on newfound radiance that showcases the brilliant range of Thompson's instrumentation and tone. You could plug in a guitar amplifier right next to you, connect a Fender, and strum. Yet you still wouldn't have the depth, intimacy, and detail afforded by this audiophile edition. It's that remarkable.

So is the diversity of the album's sonic signatures and themes. Opener "Read About Love" provides an electric-start jolt, its upbeat tempos, shimmering accents, and massive hooks framing Thompson's amusing story of an inexperienced introvert that applies pop-culture ideas of romance to the real thing. The master wordsmith finds similar ironies in the mischievous intent of "I Feel So Good," a Celtic-flavored tune whose uplifting emotions contrast with the character's out-of-control desires. Humor further wriggles in the jaunty "Psycho Street" and spirited "Don't Sit on My Jimmy Shands," an enduring tribute to the Scottish accordionist and the pursuit of collecting rare 78 records.

The singer-songwriter's knack for accentuating biting contrast – and for delving into darker regions where jealousy, bitterness, and self-deprecation reside – pervades Rumor and Sigh in the same manner his band shades his every move with narrative skill. Just listen to the faint keyboard cues on "I Misunderstood" or Jim Keltner's crisp, hi-hat cracks on "You Dream Too Much." Of course, everyone stands aside for the folk-leaning "1952 Vincent Black Lightning," a solo tour de force of musicianship and lyricism that confirms Rumor and Sigh survives not only as one of the finest records of the 1990s – but one of the best platters of the last three decades.