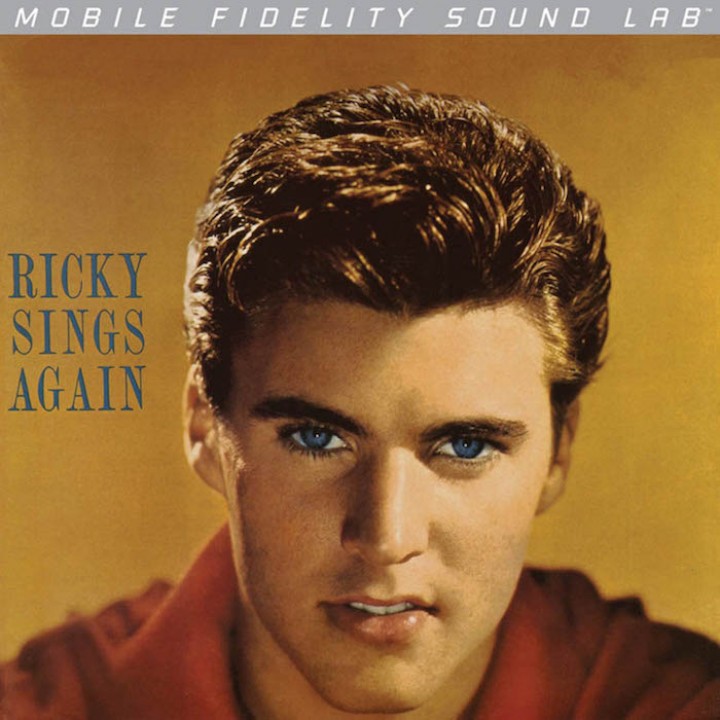 Ricky Nelson will forever be identified with the ageless single "Lonesome Town." The career-defining smash is included here, on a record that arguably remains the picturesque idol's peak moment, a 1959 set on which the singer moves away from teen pop and towards serious rock n' roll and rockabilly on par with the likes of Elvis Presley and Buddy Holly. Loaded with material expressly written for Nelson as well as tunes penned by Hank Williams and Johnny Cash, and featuring an all-star session musician band, Ricky Sings Again is a foundation-building 1950s album.

Exceeding the fidelity of any prior analog pressing and affording a warmth missing from Capitol's out-of-print digital reissues, this Silver Label LP – pressed at RTI and mastered on Mobile Fidelity's internationally acclaimed mastering system – teems with detail, presence, dynamics, and authority. With help from his legendary father, Ozzie, Nelson enjoyed superb studio production, heard here in the form of balanced instrumentation, natural tonalities, wide and deep soundstages, and you-are-there vocals. Studio dimensions, too, come across with palpable body and precision. Since the record is a collection, some of the tracks are in mono, others in early stereo.

Backed by a stellar band that includes Elvis Presley guitarist James Burton and in-demand studio bassist James Kirkland, Nelson delivers what remains a 1950s classic that stands up to everything recorded by his famous contemporaries. Burton mimics the sound of a train on "One Of These Mornings," just one of the myriad tunes here on which the Rock and Roll Hall of Fame member lays down fabulous lines and rockabilly licks that both shade and support the concise melodies. While largely recognized for the melancholy ballad "Lonesome Town," one of four Top 10 singles on the set, Ricky Sings Again is as much about early rock n' roll and extraordinary singing. About that voice.

Simultaneously tender and rollicking, innocent and mature, Nelson conveys a rainbow of emotions, pouring over country-flavored weepers and beat-driven rockabilly numbers with equal parts sensitivity, smoothness, and sincerity. A surfeit of heavenly background harmonies and innovative guitar-led breaks make masterpieces out of upbeat offerings such as "You Tear Me Up" as well as slow-dance invitations like "Old Enough to Love." Add the Jordanaires on back-up vocals, and there's something for everyone here.

No matter the performance, Nelson demonstrates time and again on Ricky Sings Again why he was inducted into the Rock and Roll Hall of Fame in the institution's second year of existence – and why, even more so than Elvis during 1958-59, he was the period's leading singles artist.