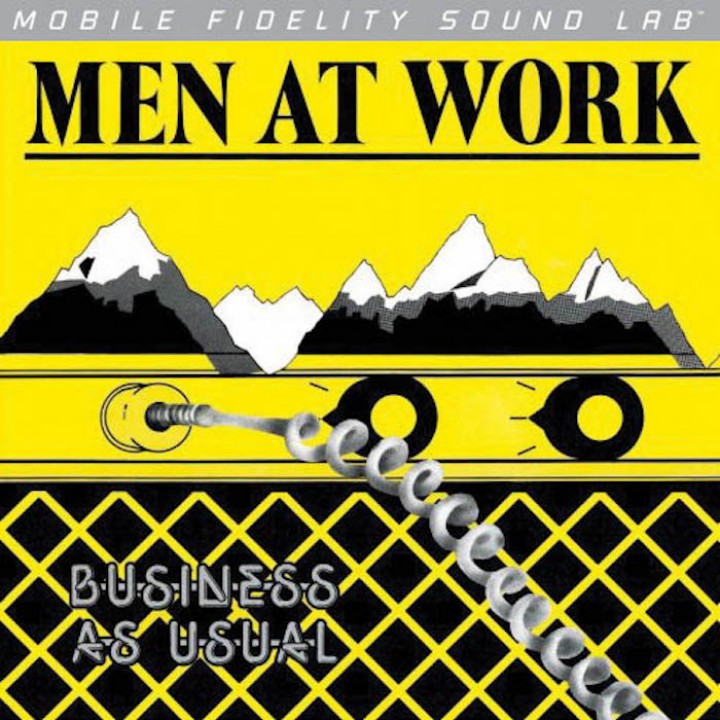 Business As Usual (Men At Work)

Numbered Edition Silver Label LP
They came from the land down under. And they conquered the charts like no band before or since, with a 1982 debut that shattered records by staying for 15 consecutive weeks at the pole position on the Billboard Top 100. They were Men at Work, a quirky bunch led by a Scottish-born vocalist whose humor, style, and distinguished singing helped the quintet become one of the 1980s' definitive new-wave acts. And it all started with the irresistible Business As Usual.

This LP retrieves an immeasurable amount of previously concealed details from the music. For the first time, the band's percolating rhythms, pulsating guitars, brassy horns, and whimsical beats come to fore without interference from congested mixes and a flat perspective. Spaciousness and imaging are restored, as is the rebirth of palpable dynamic contrast and instrumental separation. Above all, the record is more fun than ever before.

Anchored by two ubiquitous singles, "Who Can It Be Now?" and "Down Under," both still FM radio staples, Business As Usual signified a changing of the guard on the new-wave landscape. With leader Colin Hay's vocals bearing a passing resemblance to those of Sting, and his mates supplying what seems like a constant stream of keening pop-rock hooks, dance-baiting grooves, and brassy rejoinders, the record transcends any limitations and showcases a creative depth that extends to the album cuts. No wonder Men at Work soon shared stages with the likes of the Clash.

Further separating the group from the pack is its wit. Playful, carefree, and exuberant, the songs resonate with a looseness and joyousness with which the decade is forever associated. No deep thinking or profound analysis – just as the best pop tends to be!