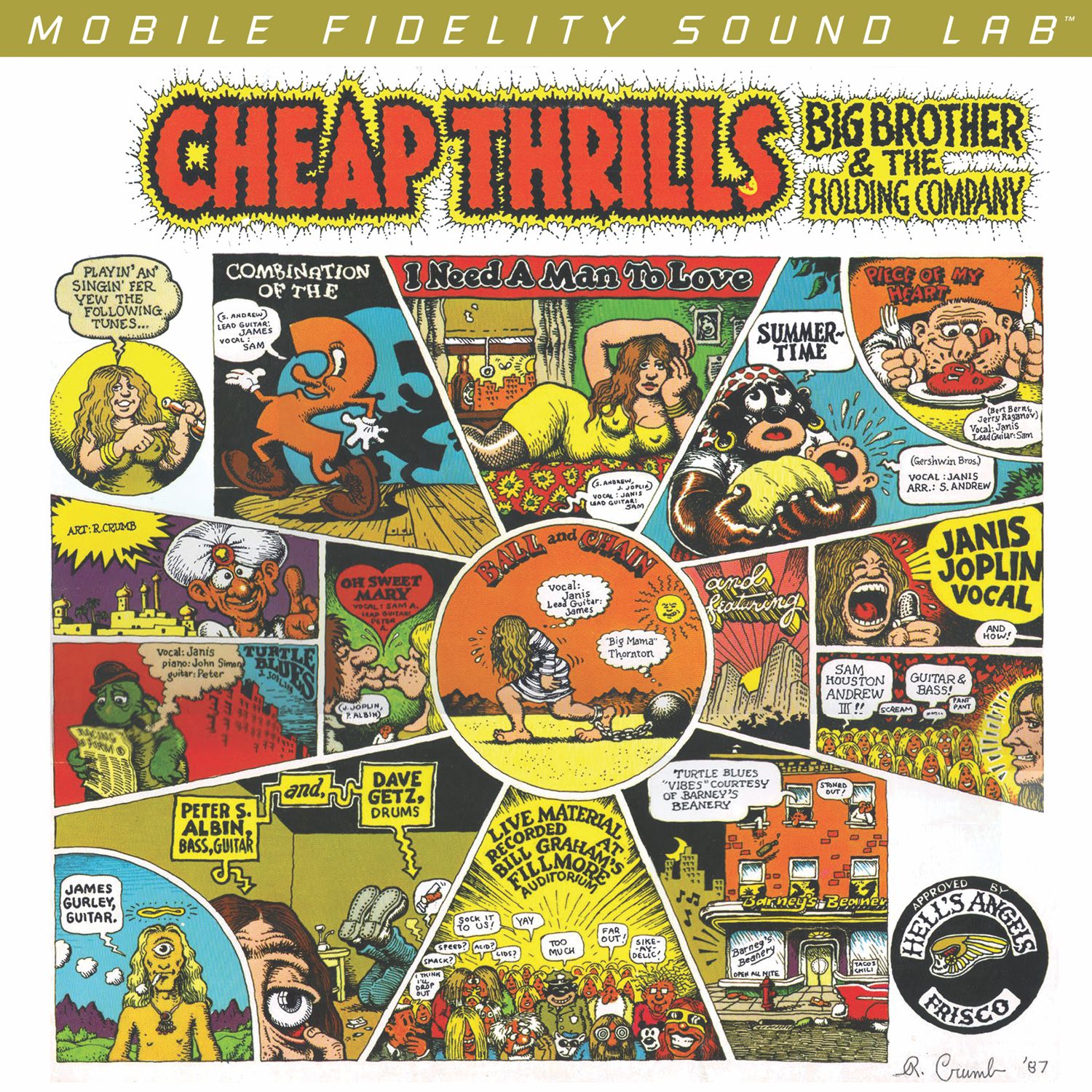 Numbered Edition 180-gram 2 LP 45 RPM
In many facets, Big Brother and the Holding Company's Cheap Thrills is the quintessential album to spring from the outcome of the Summer of Love. Best known as Janis Joplin's major-label debut, the 1968 set arrived when the countercultural movement was in full swing and before co-optation, drugs, and violence signaled the fall of the era. Ranked #338 on Rolling Stone's 500 Greatest Albums of All Time, it puts a female singer in the prominent position traditionally given to a male and showcases a band pouring a potent cocktail of fiery psychedelic, blues, and folk sounds that informed the unfettered creativity of the San Francisco scene. Produced by John Simon, Cheap Thrills also features one of the most iconic and elaborate album covers in history.

Cut at 45RPM and pressed on dead-quiet vinyl at RTI, the iconic audiophile label's analog reissue intensifies the quintet's storied sophomore effort. Due to the wider grooves, this pressing benefits from increased spaciousness, punchiness, energy, pacing, and dynamics. Joplin's hurricane-force singing reverberates with texture, grittiness, and volume. An arresting array of instrumental colors and tones comes on with clearer separation and depth. While previous pressings find the band and Joplin's voice in competition with one another for room, both emerge as distinct entities. Always noted for its rawness, Cheap Thrills sounds as close to live as it gets, an unadulterated portrait of nervy rock n' roll delivered with exuberant enthusiasm and all-out determination. This is music at is most visceral.

Having drawn national attention for their legendary performance at the Monterey International Pop Festival in 1967, Big Brother and Joplin faced huge expectations to deliver a studio set that would convey their onstage vibrancy and potency. Cheap Thrills does this and more, becoming one of 1968's most commercially successful releases that remained on the charts the week Joplin announced her separation from the ensemble. Contrary to popular belief, only one of the album's songs, "Ball and Chain," was recorded live. Everything else owes to the unhinged, spirit-elevating performances and true collaboration between vocalist and band that manifests itself throughout the record's 37-minute-plus running time. Merging biker-babe ruggedness with wounded-bird poignancy, Joplin's expressive belting, mega-watt moaning, and sensitive crooning take center stage. Yet her bandmates match every step with explosive rhythms, heavy guitar-driven blues, and assertive solos that take inspiration from free-form jazz.

Indeed, Cheap Thrills still exhilarates not only due to Joplin's almighty singing but because of boundary-shredding arrangements that reflect the period's anything-is-possible mindset. More so than any other musicians Joplin encountered, the members of Big Brother pushed limits on convention via soirees into acid-dipped psychedelia and its orbiting sonic galaxies. Together, they aim and achieve an aural mythos that makes a permanent connection between artist and audience by way of eliminating traditional divisions. Such communal power is evident on the mind-bending version of Big Mama Thornton's "Ball and Chain" and insistent, sinewy "I Need a Man to Love." It's also obvious during quieter moments, whether the tripped-out, twisted, and curvaceous contours of George and Ira Gershwin's "Summertime" or restrained, throwback acoustic blues of "Turtle Blues."

Yes, Joplin presents – and rallies against – loneliness and desperation in a cathartic language few had heard before or since. What's even more significant is the fearlessness, toughness, synergy, and sexual danger pulsing through every song, including the take-on-all-comers challenge "Piece of My Heart," which the collective attacks with career-making ferocity. Like Robert Crumb's daring pop-art illustrations that grace the cover, they simultaneously lure and dare the listener to enter a space where outsiders run free and where outlaws are heard above the mainstream din.