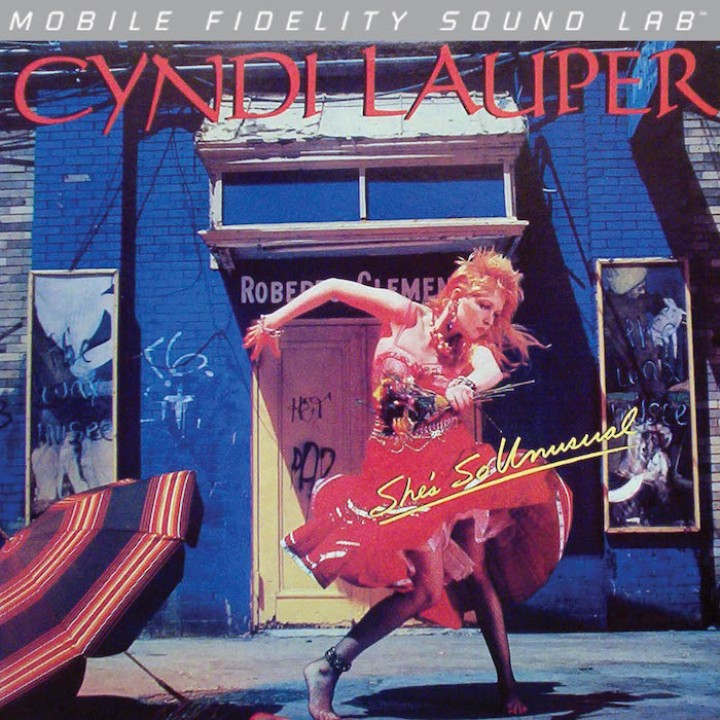 Numbered Edition Silver Label LP
Forget, for a moment, about the gypsy clothes, raspberry-pink hair, costume jewelry, and hyperactive behavior. No female artist’s debut better epitomized MTV’s vivid heyday and the smart intersection of self-reliant female politics, savvy hooks, and vibrant imagery than Cyndi Lauper’s She’s So Unusual. Long before Lady Gaga, and before Madonna embraced any traits resembling punk, the New York native ushered in a new wave of commercial pop while flaunting an exuberant confidence that, overnight, influenced a generation to dye their hair and embrace life with newfound vibrancy. Girls, indeed, just wanted to have fun.

Mastered on Mobile Fidelity’s internationally acclaimed mastering system and pressed at RTI, this Silver Label LP rescues the music from long-standing harshness and disadvantageous brittleness. Back on vinyl for the first time in decades, the multi-platinum 1984 blockbuster sounds completely anew, possessing crisper beats, a fleshed-out midrange, no artificial ceilings, and a clear alleyway to Lauper’s girlish voice. Finally, the sonics possess the wide spectrum of colors that flavor the songs.

Helmed by the anthem “Girls Just Want to Have Fun,” She’s So Unusual transformed pop culture by way of Lauper’s charismatic personality, whimsical attitude, lively performances, unique timbre, witty humor, and unabated passion. Throughout, she’s a whirlwind of emotion and cyclone of spirit, tackling insouciant party tracks with the same verve she sings arresting ballads. And while for most it would be a deterrent, Lauper sculpts her chirpy, bop-friendly voice to her advantage, underscoring each song’s combination of sentimentality and seditiousness.

“With a voice that combined the cartoon soul of Little Eva and the wink-wink naughtiness of Betty Boop, Lauper may have backed away from the depth or urgency of the writers whose work she mainstreamed, but her transformation of their power into sheer pop was ultimately subversive—giggling all the way, she incited legions of mall rats into orange-hair rebellion and a measure of self-assertion,” wrote Paul Evans for The New Rolling Stone Album Guide, hinting at the record’s normally unseen depth.

Whether viewed as a subversive new-wave crossover statement or simply as a celebratory declaration of individualism (or, both), She’s So Unusual is an 80s landmark and influential harbinger of the role women would play in both rock and pop.