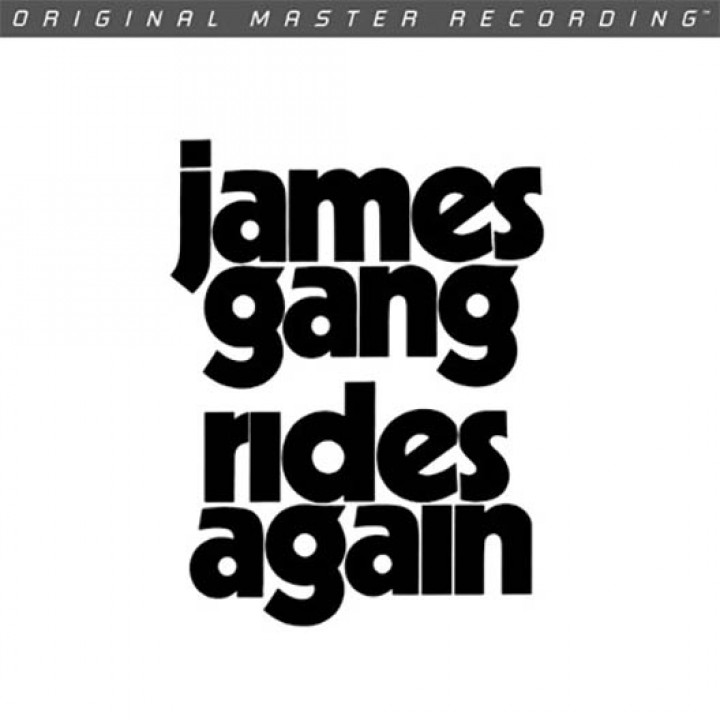 Led by future Eagle Joe Walsh, the James Gang establishes a power-trio template for all times on its 1970 sophomore album. Home to the top-down favorite "Funk #49," Rides Again sparks with a stylistic versatility, hard-rocking edge, and balladic vulnerability united by tight-knit musicianship. The quartet's penchant for crunch-laden boogies and focused jamming pours out on the first half of the record before the band pulls its trick bag out on the second half and injects keyboards into the stylistically varied mix. From start to finish, Rides Again is a 70s rock classic – and, now, one that at last features first-rate sonics to match the music.

Recorded at the then-brand-new Record Plant, the songs sound more authoritative and fun than ever before on our restored analog pressing. Mastered from the original analog tapes, pressed at RTI, and strictly limited to 4000 numbered copies, this 180g LP teems with involving textures, details, and depth hidden from view on prior pressings. The dimensional body and weight of the guitars, probing low-end of Dale Peters' bass lines, reedy timbre of Walsh's singing, and pacing of the crisp percussive cues are all enhanced. Increased separation between the instruments and airier, more open soundstaging add to the record's toe-tapping fun and seemingly unlimited groove quotient.

Walsh, without question, remains the biggest draw on Rides Again. The FM radio staple "Funk #49" – kick-started by the irresistible declaration "I sleep all day, out all night/I know where you're goin'" – continues to be identified by many as a Walsh solo tune. Yet it, as well as the sexual thrust of the head-bobbing "Woman" and proto-metal slash of the multi-part "The Bomber," fully represents the pure chemistry and locomotive momentum of the James Gang. With Walsh's Echoplex-equipped slide guitar making psychedelic- and blues-leaning comments, his mates pick up on the direction and answer with melodic responses.

Throughout the record, the trio's synergy clicks at every turn. Such interplay extends to the more diverse, country-tinged fare on Side B. Streaked with throaty organ passages and reflective moods, sincere midtempo ballads like "Tend My Garden" tease with rave-up structures and express a softer side of the group. Similarly, the acoustic-based "Garden Gate" and Jack Nitzsche-orchestrated "Ashes the Rain and I" showcase sincerity and diversity suggesting the James Gang prepared to defy limitations afforded most of its peers.

Yet Walsh's departure in 1971 changed the group's fortunes – and, by extension, upped the value of Rides Again, which survives as a near-flawless example of earnest 70s rock and organic playing.

Product Code:LMF477
Out of Stock