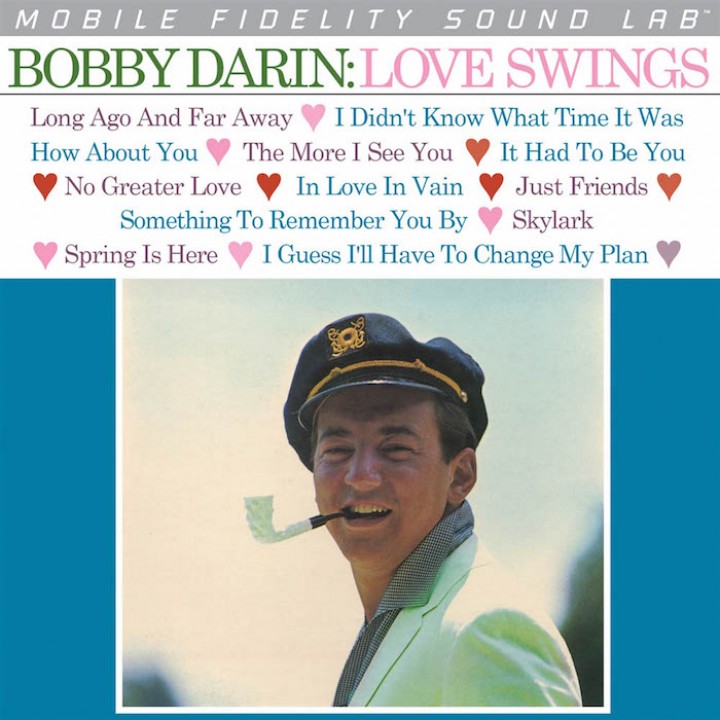 Bobby Darin didn't want to be simply known as the singer that scored the novelty hit "Splish Splash." Determined to be recognized as a top-tier vocalist on par with the likes of Frank Sinatra and Tony Bennett, the Bronx native set out to put an authoritative stamp on pop standards. And did just that with Love Swings. Divided into two conceptual halves, the 1961 masterpiece is the singer's defining statement, a splendidly effective and smartly performed record that addresses the wild emotional fluctuations associated with romance and finds Darin nailing every note.

Mastered on our world-renowned mastering system and pressed at RTI (the best record plant in North America), Silver Label numbered edition LP presents Darin's buoyant album with all the brassiness, boldness, and lushness any fan of vocal pop music would ever want. His voice is transparent and immediate, the diversified instrumental arrangements are placed in sharp relief, the songs replete with airiness, warmth, and the sough-after breath of life. The sound is so good that this somewhat-forgotten LP should now finally gain the recognition it's long deserved.

"Yes, Love Swings, but like a pendulum: back and forth," state the record's liner notes, explaining the concept behind a set that is split into two thematically connected halves. On the first side, Darin delves into the giddy feelings and incredible happiness associated with romance's first bloom. Infatuation, devotion, and gaiety take hold, Darin conveying every ounce of joy and pleasure tied to gliding, uptempo staples such as Rodgers and Hart's "I Didn't Know What Time It Was" and the lounge-bound sway of "Long Ago (And Far Away). Darin's voice, and his ebullient support band (conducted by Torrie Zito), epitomize glee, delight, and bliss.

On the flip side, Darin, ever the realist and proving himself capable of sophisticated material, probes love's disillusions and heartache with incredible panache. The pace slows, the mood darkens, and the lights dim. Zito's orchestrations embrace denser, more poignant tones, and Darin delivers sad, aching tunes like "In Love In Vain" and "Something to Remember You By" with stunning realism and haunting impact. It's as cohesive of a vocal performance as you'll hear from the era, a journey that takes you from the highs to the lows, and everything in between.

Yes, the human voice is the most difficult element to accurately reproduce on record. Yet Mobile Fidelity's Silver Label LP does wonders with this Darin classic, opening up the highs, clearing out a previously foggy midrange, and, as importantly, restoring to print in analog a vocal tour de force. Unavailable on vinyl for eons, Love Swings demands to be heard on this sumptuously remastered LP, which runs circles around its digital brethren.